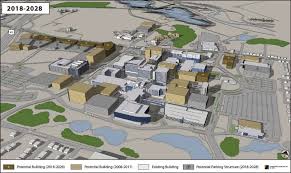 Both meetings included trained communications experts doing what they do best. They told me about how much MRMC and WLC do and how much they try to avoid problems with the neighbors. I got the impression that both entities have some kind of neighborhood outreach element in place, but I guess I assume it's mostly a Tosa thing. And maybe that's the most important thing I learned: I'm pretty sure very few residents from Milwaukee have rocked the boat, and it would probably take a whole lot of rocking to really get anything rolling.

The MRMC phone call ended with assurances that employees would be notified not to drive like jerks through our neighborhood, which might have happened. However, I later tried to email the woman I had spoken to, and my email address was blocked. Even if that's just a fluke, I certainly have heard nothing new for a few months, and I have seen very few changes.

Jim from WLC met with me over coffee in the union. Ever been in there? Me either. That was kind of the point I was trying to make: they run this large business that seems like a members only club, even though they are located in a nice neighborhood with a lot of unchurched people. He gave a list of volunteering they do, and it seems the students there are generally good people, but I still don't think many of us residents would really know that. Some of my suggestions included local library cards, some upkeep items on the apartments, and public art or beautification, like a garbage can along Bluemound. I hadn't though of it at the time, but he had mentioned the MRMC / WLC coalition to make a wifi net over the area, and that would certainly be a well-deserved gift to the residents in this area, but I did not get impression free wifi for neighbors had ever been floated.

The results of the WLC meeting? I believe I say some painted metal pipe handrails. I guess it's an effort, anyhow, though it kind of reminds me of the extra credit option in DeFelice's Meteorology course in college. All these professional student-types turned in scientific data sheets with five-page papers, and then these two freshman girls came up to him and handed him a poster with cotton ball clouds glued on. So far, WLC has offered the community cotton ball clouds, but that's better than business as usual at MRMC, anyhow.