Talking Baseball With a Neighbor 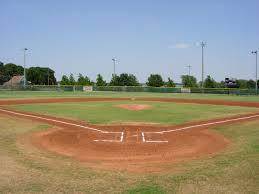 Whenever Lisa and I have gone for walks, she always likes to say hello to the neighbors. Some of them have said more than others in return over the years. However, after we talked to one neighbor for over twenty minutes tonight, Lisa admitted it would be strange, after about eight years of talking to the guy, to finally ask his name. Or offer our names, for that matter. Yes, it should have happened at some point in the first year or so, but when it didn’t, the whole introducing ourselves got more awkward.

This article isn’t really about properly introducing yourself to your neighbors, though. It’s more about baseball. When I looked the neighbor up using Milwaukee’s tax key lookup system (he’s Fred, by the way), I then searched the neighbor’s name in order to make sure it was really him, since he lives in an apartment. Also, Fred, if you’re reading this, we’re Brian and Lisa. I found an obituary mentioning him, and then I found this cool article about his dad. It’s cool because it’s from 1938 and about amateur baseball. I’d just read that Mitchell Park used to have amateur games in the 30s with over 20,000 people in attendance, but I had never realized that even smaller parks had thousands watching. In the article, it says the teams (North Milwaukee Greenbaums and Harnischfeger Tanners) played before a crowd of 2500 at Garfield Park. I assume this park was part of Metcalfe Park and/or located around 30th and North. Looks like it’s been kind of taken apart now, though I can’t confirm there ever was a Garfield Park, even though Garfield Park apartments exist.

Anyhow, Lisa thinks I’m envious because amateur baseball in Milwaukee used to draw thousands, and I’ve spent 20+ years playing in front of MAYBE a TOTAL of 2500 folks. That’s not a huge deal, but it is pretty cool that our neighbor’s dad has been immortalized by The Milwaukee Journal Sentinel and Google newspapers online. It’s also cool to see a few of the nicknames used, and there were probably more. Here’s a bit of the article:

“The game was a great battle for four innings until Fred Madritsch [our neighbor’s dad] yielded the Tanners four hits and a walk in the fifth for four runs. It was the one bad inning Fred usually has in every game. [harsh?] Chink Staskunas was the hero of the rally [...] The Greenbaums also came up with some spectacular fielding by Staskunas, Gypsy Konleczny [or Konieczny] and Johnny Adrian. Chink nipped John Marisch with a beautiful throw from short field to first; Adrian made a spectacular running catch of Bud Wysindlowski’s fly into center field, and Gypsy saved the game several times by his brilliant support from the short position.”

I love the nicknames. I don’t even know what short field is, but I assume the right fielder threw someone out trying for a single. Plus, that’s only like half the article, so real reporters wrote real articles about amateur baseball, and 2500 fans showed up for a game that was rained out after five innings. It’s too bad Fred, John, Johnny, Chink, Gypsy (sometimes Gipsy) , Bud, and the rest of the boys aren’t around to see this on the internet, but I enjoy it, anyhow.

It all makes sense, too, as far as our neighbor is concerned. He said he played baseball for years, winning the rec league (Stars of Tomorrow) tournament as a kid, and then playing in several softball leagues for thirty or so years. He mentioned playing at Nash Park, where I grew up, so I probably saw him in a game at some point. I also won the rec league championship in 1987, but they didn’t let us wear old wool uniforms like he got to do in the 60s. That had to be a sight: a bunch of sandlot kids who hadn’t worn uniforms all year suddenly wearing years-old wool jobs for the final game.

I told Lisa that my (similar) tournament was odd because we played “lob” ball all season, and then we had to play the real deal. And their pitcher was fasssst. I remember being the first to get a hit off him, but I was not part of the rally to win the game. I assume Greg Ozmanski pitched for us, but you’d have to ask him. Something to remember, but probably no newspaper article about us or most of the thirty-some-odd years of baseball I’ve played. Well, this article is around, I guess. Like I said, it’s not really about me and my sandlot crew, or our neighbor and his softball prowess, or even the teams back in 1938. It’s about baseball, and stories, and neighbors, and friendships. And that’s a lot. 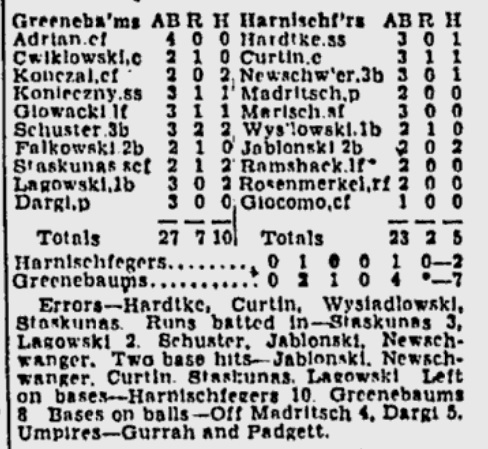