As Milwaukee looks at expanding a rapid bus system, it’s interesting to look back at the rapid transit system that existed in the Ravenswood / Zoo Interchange area in the past. We won’t get into the politics of what led to the demise of the streetcar or early 20th Century rapid transit, but it’s ironic that the city has spent the last twenty years trying to re-figure out something that seemed to have been figured out many years ago (the East-West Corridor). One thing I can tell you for sure, Speed Rail was a much cooler name than Bus Rapid Transit.

Joe, a neighbor, sent me the following photos, so I can’t take credit, but I’ll explain some of what I see in the vintage pictures of the Milwaukee area. 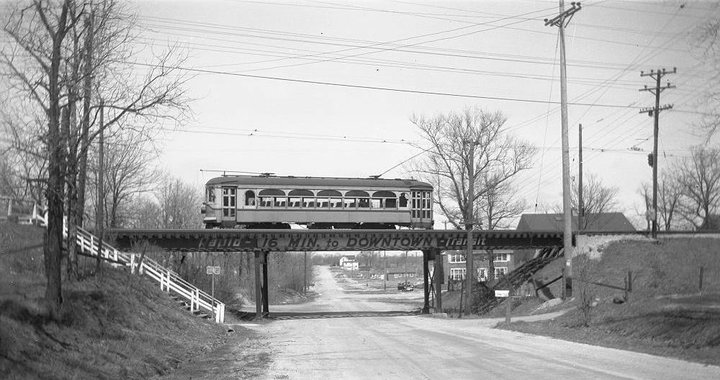 The first image is of the Speed Rail at 92nd and Hawthorne. It looks from the map that 92nd may have been called Woodlawn Avenue at this time or a bit before. You can see the apartments along Hawthorne (Fairview Avenue then), but none of the homes have been built, so it’s pre-1955 or so. The car looks like ones from the late 40s and early 50s, so that’s what I’d assume. The most striking part of the photo, however, is “16 MIN. TO DOWNTOWN.” That’s fast, rapid, or speedy. Currrently, the Gold Milwaukee bus line is 25-30 minutes to downtown from 92nd and Wisconsin. I cannot find any stats on what Bus Rapid Transit would take from 92nd and Bluemound, but I can’t imagine shaving more than ten minutes off the regular bus. Plus, if car lanes are closed along Bluemound, then you have slower car commutes. Speed Rail really was the best way to do what we’re trying to do all over again. 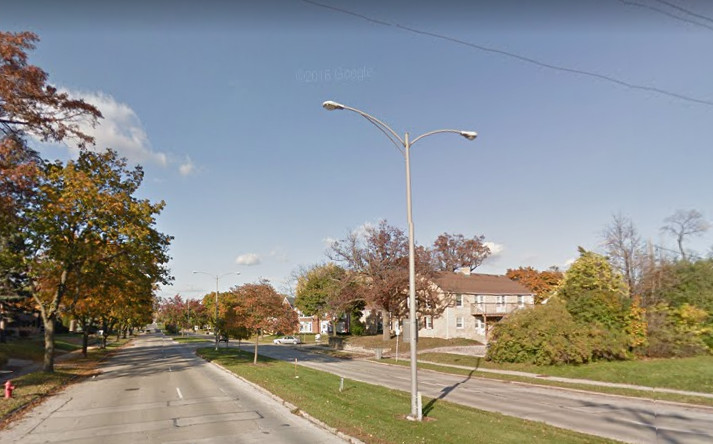 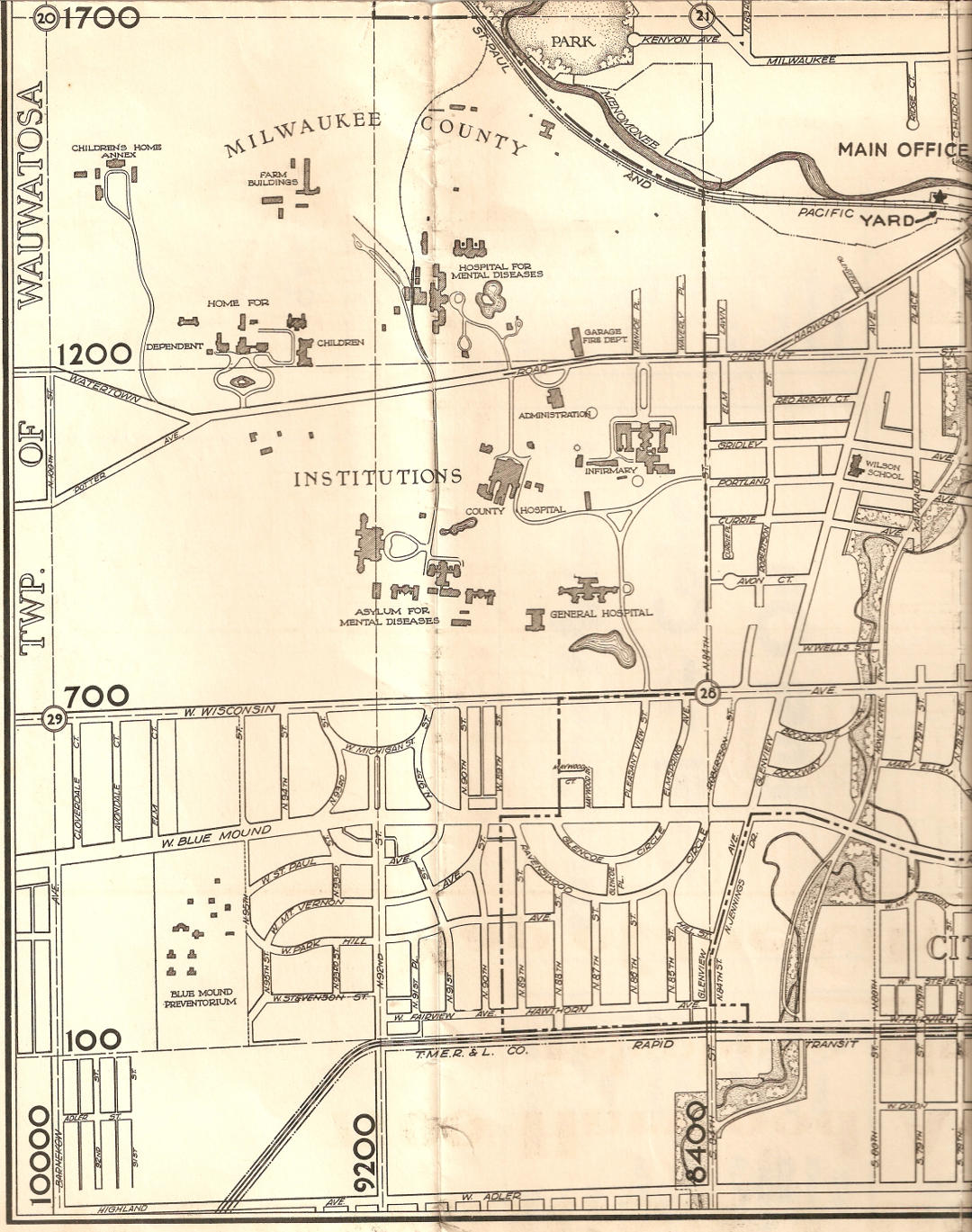 The next image is a map from around the same time period as the electric rail above. It shows the rail line along Hawthorne and Fairview, where the high power lines now run. T:ME.R. & L. CO. (or something to that effect), which stands for The Milwaukee Electric Railway and Light Company. You can also see Hawthorn (without the “e”) turn into Fairview where Wauwatosa turns into Milwaukee. I assume there was some street-naming tension at this time in city history, since you also have 84th St become both Glenview Ave and Jennings Dr, depending on which side of the street you were on. Also interesting to note that alleys seem to be drawn on the map.

Another interesting location on the map is the Blue Mound Preventorium, which was used to isolate people who had been infected with tuberculosis but did not yet have an active form of the disease. The area today is Milwaukee Montessori and Parkside Pool Apartments (some isolation still exists). 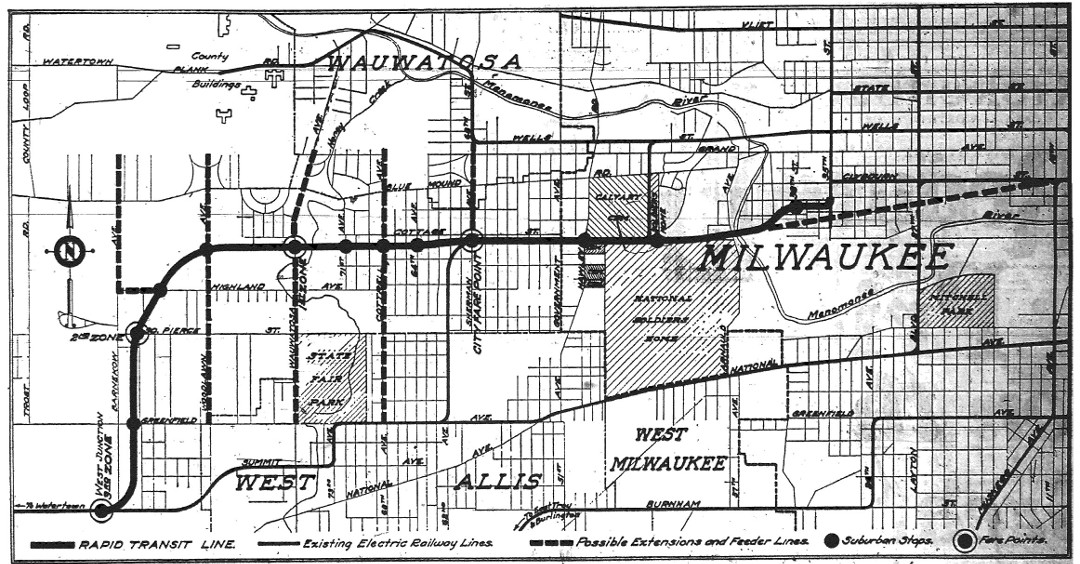 The next map shows the transit lines. It looks like the Speed Rail Rapid Transit that went to downtown from Ravenswood either became an electric railway at 35th and Clybourn or linked to one there. I am not sure there was much of a difference between the two. Irrelevant if it was only 16 minutes to downtown, unless that was AFTER the “possible” extension listed in the map. Oh, 51st was also Government Ave. And Stevenson was Cottage Street.

On a rail enthusiast website, I found that the tickets for the Speedrail came from 2nd and Everett (basically Clybourn). Eleven minutes to 68th street on the schedule. I also learned that the Speedrail was gone by 1952, partially because of a head-on crash that killed ten riders on Labor Day in 1950 (south of the boundaries on this map). It appears the fate had already been set before the crash, with many lines converting to bus service by this time. However, it’s certainly something to consider what might have happened if the crash had not occurred, since Milwaukee had one of the last rail-based systems in the country as of that time. Another decade, and we might have seen the value of the line to the East-West Corridor. 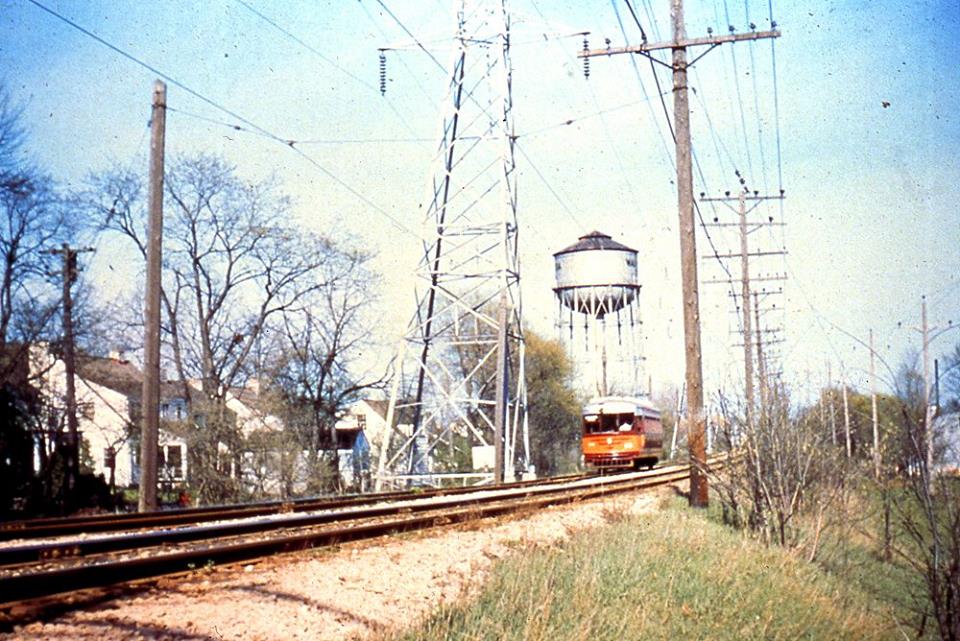 The next photo is of the Speedrail circa 1950, heading west towards the stop on 92nd. You can see the 84th Street Wauwatosa water tower. Imagine living at the end of fancy Ravenswood along Hawthorne with the water tower on one end, and high-power lines and Speedrail running through the back yard. The convenience of the rail system was probably outweighed by the noise for some residents. I’ve also included a modern view of the same general location.

The last photo shows the Speedrail going past the power substation heading into the Zoo Interchange (before the expressway was built). 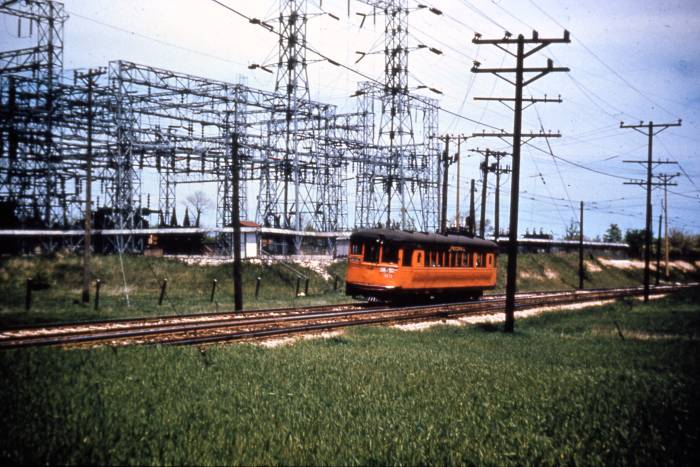 I used Google Maps in satellite mode to see if there are still any remnants of the old rail line, and I’d say it’s fairly well hidden. You can follow the power lines down to the stadium, and you can imagine the train going over the Menomonee River at some point, but tracks and bridges are gone--just some barren empty lots and parking lots. I’m sure it was something to see as it sped through Pius’s current parking lot or over 92nd Street when it was little more than a dirt road.

Wait, there's more. A black and white of the same area: 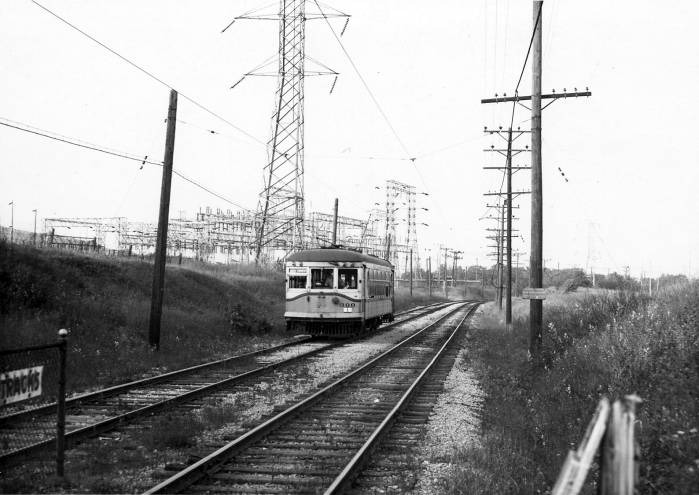 And my favorite. This is one of those types of photos I'd use in the classroom when I was teaching. Just imagine the stories here. The sailors, their friend, and the two businessmen. And who took the photo, too? Where are they headed? Who's maybe standing inside the waiting area? What's the year? Who ended up the happiest?

If you know any of these guys, be sure to write me a note. And if you have similar photos to the ones on this page, I can add them to the website. 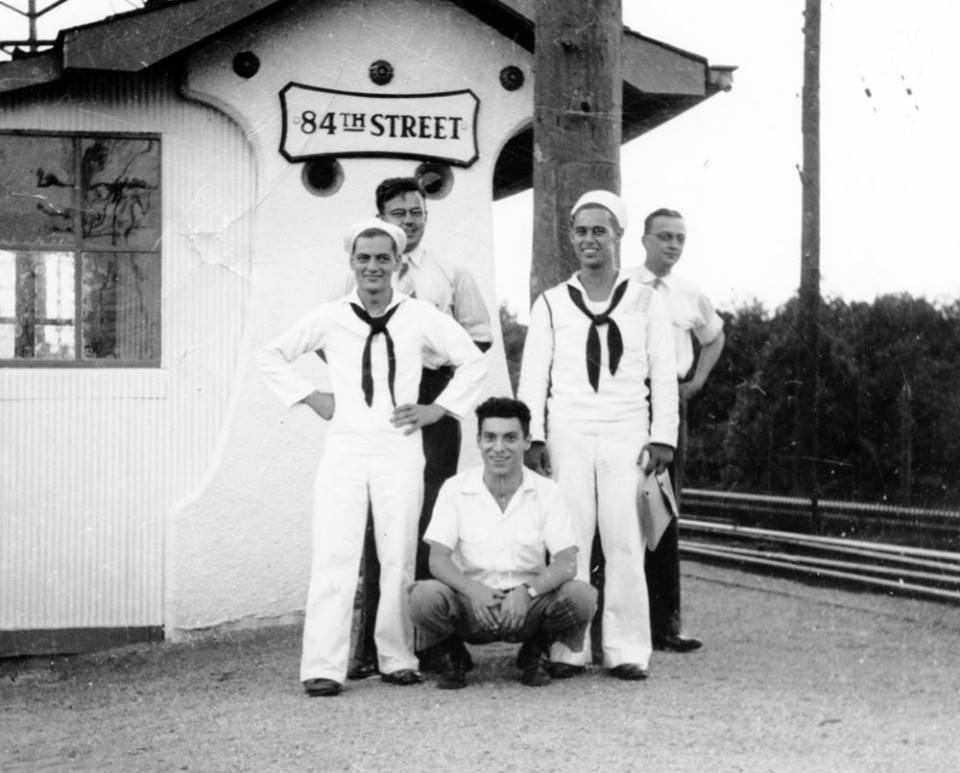